Jenkins User Conference in Israel was held this year on a different venue than the last year, because we have grown! I believe Shlomi Ben-Haim of JFrog said in his opening speech that the attendance has grown more than 50%, despite the ticket price increase.

This year, the event was held at a former Kibbutz turned into an event facility. This was rather fit for Jenkins for both emphasizes the community. The auditorium was big, the sky was bright & clear, and it was a wonderful day. JFrog folks even made a few Jenkins drapes (that I eventually brought back with me, so expect to see them) 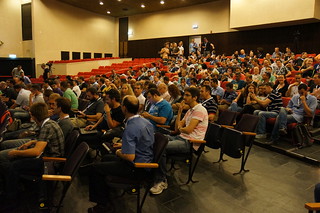 For me, talks like one from Haggai are more interesting, as it shows me how Jenkins works in a domain that I’m not familiar with (in this case, .NET). And if you are Jenkins users, there are all sorts of talks, ranging from talks on CLI/XML interface of Jenkins (stuff for those who are writing tools and scripts that interface with Jenkins) to how someone managed user interface automation testing with Jenkins. Another talk that I got hooked was a talk from Yardena Meymann about the review board Jenkins plugin that she wrote that lets you test out code change under the review, much the same way BuildHive or GitHub pull request builder plugin does it for GitHub pull requests, but for Subversion. I also liked the 45 minutes format better, which helps cut the fat and take people straight to the point.

Outside talks, Israeli people kept me busy! They cornered me on multiple occasions and we had a lot of interesting conversations, so much so that I missed about half the talks! I just wish we had coordinated this upfront so that I could have visited them while I was there. This also made me wonder what if we designate one corner of the site and did a series of birds-of-feather around specific topics. This led me to try Jenkins Scalability Summit in the upcoming JUC Palo Alto.

All the slides and videos are available, if you want to take a look --- be forewarned that some of them are in Hebrew.

If you aren’t in Israel but like the concept of JUC, looking forward to seeing you in the upcoming Jenkins User Conference in Palo Alto this October. About the Author